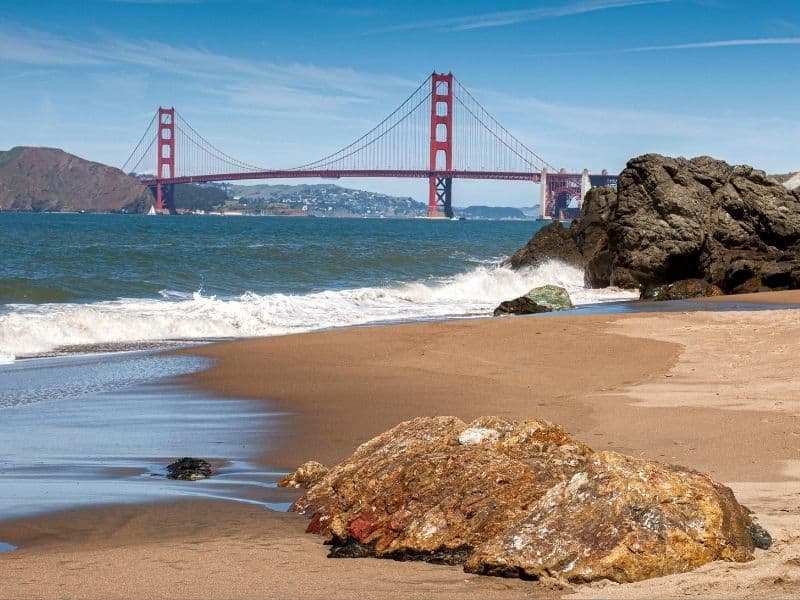 I’ve racked my brain to come up with my silliest and funniest puns about the Golden Gate Bridge, perfect for you to use for funny San Francisco Instagram captions!

In a Golden Gate of mind.

Nothing can gold a candle to this bridge!

Whenever I see the Golden Gate, my heart just ex-spans.

You can truss that you’ll never find a bridge more beautiful than the Golden Gate.

Isn’t it iron-ic that the Golden Gate is red, not gold?

The Golden Gate steels my heart every time.

I have to steel myself every time I take in this view of the bridge.

I’d love to cross the Golden Gate, but I’ve got a short tension span.

Can’t wait for my next trip to SF – the suspension is killing me!

I’ve really mist these views of the Golden Gate

Have to seen the Golden Gate Bridge in the fog? It looks so mist-ical!

I tried to take a photo of the Golden Gate covered in fog, but I mist.

Karl me crazy, but there’s no place more beautiful than the Golden Gate [note: Karl is the name of San Francisco’s fog, because yes, we named him]

Why doesn’t Karl the Fog visit cities other than San Francisco? Because he’s a monoga-mist.

It’s been a while, Golden Gate — I’ve really mist you.

It’s hard to take good photos of the Golden Gate all covered in fog, but I think I made dew.

If you make the Golden Gate Bridge shorter, is it now abridged?

I don’t like driving over the Golden Gate Bridge. It really takes a toll.

I banged my head on a low part of the bridge — I’d have been OK if viaduct!

If someone drives across the Golden Gate Bridge without paying the toll… does that make them a truss-passer?

What did the engineer say to the bridge after it had collapsed? I trussed you!

I’ve been thinking about the Golden Gate Bridge for a while now. I really don’t love her anymore, but I cantilever.

Just watched a documentary on how they made the Golden Gate Bridge. It was riveting.

What do you call a polite bridge-builder? A civil engineer.

Broken bridges really annoy me. I just can’t get over them.

Did you hear about the big storms in San Francisco? It’s all water under the bridge now.

What language does the Golden Gate Bridge speak? Span-ish.

What to Pack for Golden Gate Bridge Photo Scouting

READ NEXT
The 50 Best Instagram Spots in San Francisco

Pin This Guide to the Best Golden Gate Puns & Jokes!