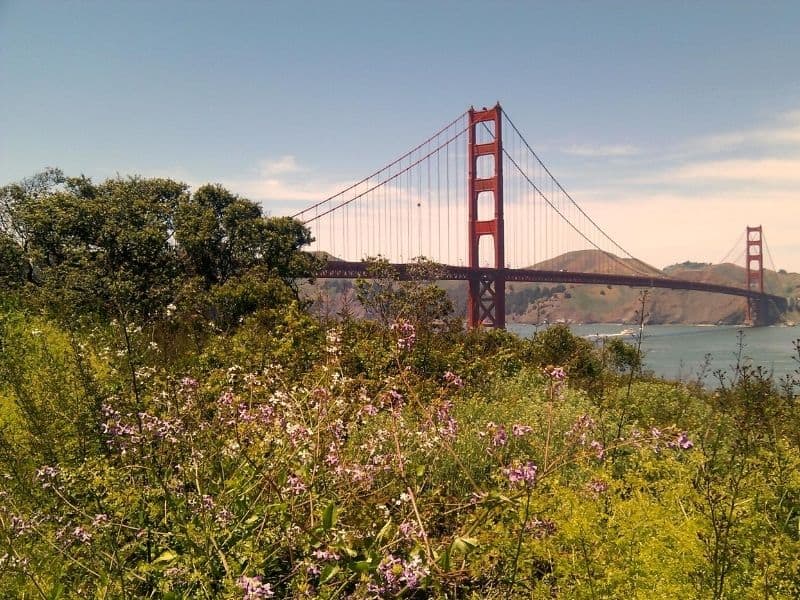 Describing the Golden Gate in words is hard: its beauty simply defies description.

Luckily, writers greater than I have tried, and they’ve come up with some wonderful (and a few wacky) Golden Gate Bridge quotes that at least grasp at the beauty of this most famous icon of San Francisco.

“To this Gate I give the name of ‘Chrysopylae,’ or Golden Gate, for the same reason that the harbor of Byzantium was called ‘Chrysoceras,’ or Golden Horn.”
— Capt. John C. Fremont

“The bridge is a triumphant structure, a testimony to the creativity of mankind.”
— Kevin Starr

“The mystical structure, with its perfect amalgam of delicacy and power, exerts an uncanny effect. Its efficiency cannot conceal the artistry. There is heart there, and soul. It is an object to be contemplated for hours.”
— Herb Caen

“The Golden Gate Bridge is one of the greatest monuments of all time. … What has been thus played up in form should not be let down in color.”
— Irving Morrow

“One soft humid early spring morning driving a winding road across Mount Tamalpais, the 2,500-foot mountain just north of the Golden Gate Bridge, a bend reveals a sudden vision of San Francisco in shades of blue, a city in a dream, and I was filled with a tremendous yearning to live in that place of blue hills and blue buildings, though I do live there, I had just left there after breakfast.”
― Rebecca Solnit

“He caught a glimpse of the twin towers of the Golden Gate Bridge, barely showing above the foggy flood. Farther north, small patches of the hills of Marin could be seen through the fog breakers that dashed over their tops and almost seemed to splash down to the bay below.”
― Zilpha Keatley Snyder

“The Golden Gate Bridge should be understood symbolically, in the sense that it does not go from America back to America but that it should be something that could possibly open up out of America.”
― Simeon Wade

“I have known her for 15 years, and she is more beautiful than ever … Her hair is usually a copper-red, and she has enormous feet, but once you have seen her bathing in the sun, she becomes a woman you will never forget.”
— Dean Jennings

“We crossed the famed Golden Gate Bridge, which you may know best from the opening credits of Full House, and also every bit of visual media that wanted to make clear that it takes place in San Francisco. The dense fog shrouding it cleared once we reached the other side. “Thickly fogged,” not California, may be the bridge’s native state.”
― Thomm Quackenbush

“San Francisco put on a show for me. I saw her across the bay, from the great road that bypasses Sausalito and enters the Golden Gate Bridge. The afternoon sun painted her white and gold—rising on her hills like a noble city in a happy dream.”
― John Steinbeck

“This bridge needs neither praise, eulogy nor encomium. It speaks for itself. We who have labored long are grateful. What Nature rent asunder long ago, man has joined today.”
— J. Strauss

“Drafting is like painting the Golden Gate Bridge. The closer you get to the end, the more you start to worry about the beginning.”

“The Golden Gate wasn’t our fault either, but we still put a bridge across it.“ —  Larry Wall

“The Golden Gate Bridge should have a long bungee cord for people who aren’t quite ready to commit su*cide but want to get in a little practice.”
— George Carlin

“This studio has more suspensions than the Golden Gate Bridge.”
— Humphrey Bogart

Quotes about the Golden Gate Bridge from Poets and Singers

“Such was life in the Golden Gate:
Gold dusted all we drank and ate,
And I was one of the children told,
‘We all must eat our peck of gold.“
—  Robert Frost

Allison Green is a travel blogger, writer, and podcaster who grew up in the Bay Area of California. She has spent time living in New York, Prague, and Sofia, but has returned to live in the East Bay. She has traveled to 60 countries before the age of 30 while running several digital travel businesses. Her writing and podcast have been featured in Forbes, CBC Canada, National Geographic, the Huffington Post, and CNN Arabic, amongst others. She’s obsessed with dogs, wine, and anywhere she can see the ocean.

READ NEXT
How to Spend A Delightful Day in San Francisco