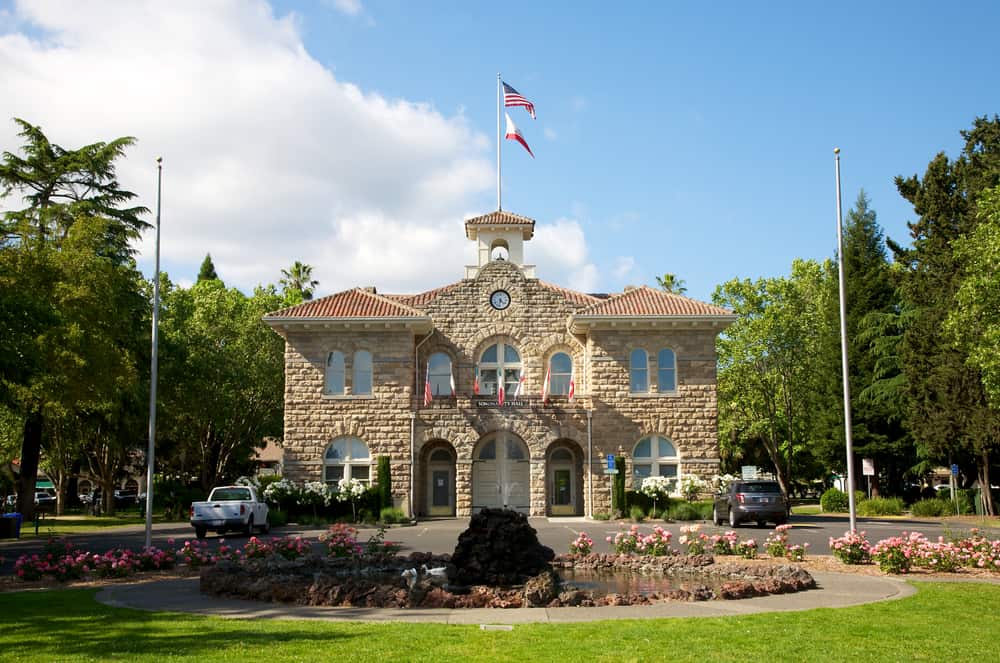 San Francisco is spoiled for choice when it comes to wine, with three wonderful and distinct Northern California wine countries within about an hour’s drive from the city!

If you’re planning on visiting California wine country from the San Francisco Bay Area, you’ll have to narrow down if you want to visit Napa Valley or Sonoma (or both).

If you haven’t decided, I have a guide comparing Napa and Sonoma here!

Since you’re reading this post, though, we’re going to assume that you’ve decided you want to visit Sonoma from San Francisco!

But before we discuss how to get to Sonoma from San Francisco, let’s get specific on what that means because Sonoma Wine Country is a huge region!

These terms are often used interchangeably, but the reality is these are three very distinct places, with some overlap!

Sonoma is located 45 miles away from San Francisco and takes about 1 hour driving to get there if there’s no traffic (but there usually is, so let’s say 1.5 hours).

Sonoma is a small but charming city centered around Sonoma Square, where you’ll find the historic Mission San Francisco Solano as well as a number of tasting rooms, boutiques, and restaurants.

Meanwhile, Sonoma Valley is a 17-mile-long valley that encompasses some, but not all, of Sonoma County’s wine regions, as well as the town of Sonoma and other towns like Glen Ellen and Kenwood.

Meanwhile, Sonoma County is a massive area! It stretches roughly from Petaluma up to Cloverdale, including the large city of Santa Rosa as well as the coastline from Bodega Bay up to Sea Ranch.

Nearly the whole region of Sonoma County grows wine, but it is concentrated in the Sonoma Valley and Russian River Valley areas, as well as the AVAs around Healdsburg (Dry Creek Valley and Alexander Valley).

Is there a train from San Francisco to Sonoma?

Sort of! If you catch a ferry from San Francisco to the Larkspur Landing terminal, you can take the SMART to Petaluma, Cotati, Rohnert Park, or Santa Rosa.

However, to then get to the city of Sonoma, you’d need to take a bus from either Petaluma or Santa Rosa.

How do I get from San Francisco to Sonoma without a car?

Further on in this post, I get into all the ways you can get to Sonoma from San Francisco without a car, but I’d personally pick a wine country tour as the best method.

READ NEXT
11 Cool Things to Do in Duncans Mills, CA

It’s easier than figuring out public transit, especially if you want to visit wineries, which are generally not centrally located within cities.

A wine tour will cover pick up, transportation between wineries, and drop off back at your apartment or hotel without any hassle or need to figure out any complicated public transportation schedules.

What is the quickest way to get to Sonoma from San Francisco?

Sonoma is only 45 miles away by car, so driving will be the best choice!

While there are technically flights from San Francisco to Sonoma, I can’t imagine any situation in which this would be a good use of time or money.

If you can’t or don’t want to drive yourself, a tour that includes pick-up and drop-off is the next-best option.

How to Get From Downtown San Francisco to Sonoma

This is the easiest way to get to Sonoma if you’re local to the Bay Area or plan on renting a car while in San Francisco.

Highway 12 will take you all the way up the Sonoma Valley, including Glen Ellen and Kenwood, though there can often be traffic on this route!

Alternately, if you are visiting the Russian River Valley area of Sonoma, you’ll want to take a different route.

You’ll still cross over the Golden Gate Bridge, but then you’ll take Highway 101 all the way up past Petaluma.

You can then take Highway 116 in Cotati / Rohnert Park to Sebastopol, which is a great wine tasting area; alternately, you can continue up Highway 101 until you hit Healdsburg, another great wine country area!

Pros: You have the most freedom and it’s the best way to see the variety of Sonoma County, since it’s a massive region with lots of unique things to offer!

READ NEXT
17 Fun Things to Do in Sonoma in Winter

An even easier way to visit Sonoma from San Francisco is to take a day trip that covers it all for you, including pick up, transit in between wineries, and drop off.

This is a great option if you are visiting San Francisco from outside the metro region and don’t have access to a car and aren’t sure about renting a car in the city (from a Bay Area native: I don’t recommend it).

A wine tasting tour from San Francisco will take out all the planning and guesswork so you can just enjoy your day out!

Here are the best wine tours of Sonoma that include transportation from San Francisco:

Sonoma Wineries | If you want to see as much of Sonoma’s wine country in one day as you can, this is the best tour option. This small group wine tour includes three distinctive boutique Sonoma County wineries, as well as lunch and sightseeing in Sonoma Square.

The tour either ends in Sausalito, where you can take a ferry back to San Francisco, or you can continue back to get dropped off in the city.

Muir Woods + Napa Valley + Sonoma | This is the most comprehensive tour from San Francisco! If you were struggling to pick between Napa Valley and Sonoma, you no longer have to with this tour — and includes a stop in the redwoods of Muir Woods as well, as if two bucket list wine regions in a day wasn’t enough!

Napa + Sonoma | If you want to visit just Napa Valley and Sonoma Valley, but don’t mind skipping Muir Woods, this is a great tour option that gives you more time to focus on wine tasting! It also includes time in Sonoma Square and wine tastings at three different wineries.

Half-Day Sonoma Wineries Tour | If you just want to focus on Sonoma wines during your stay and you want a cheaper option, this half-day tour includes tastings at two wineries and a stop off in the charming Sonoma Square, where you can opt for lunch or sightseeing before being dropped off back in San Francisco by mid-afternoon.

There is limited public transit available between San Francisco and Sonoma, depending on where you are going in the county.

If you are going to Petaluma, Cotati, Rohnert Park, or Santa Rosa, you can take Golden Gate Transit Route 101.

However, none of these locations are really in the heart of Sonoma Wine Country, which is centered around the towns of Sonoma, Glen Ellen, Healdsburg, and Sebastopol.

If you are going on to the city of Sonoma, you’ll have to take a bus from Petaluma or take an Uber, which is about ~$30-40 one-way between Petaluma and Sonoma.

How to Get from SFO to Sonoma

If you are flying into San Francisco and want to get to Sonoma, renting a car is the best way to get there!

You can check out all the different car rental options in San Francisco here.

From SFO, you’ll head up Highway 101-N towards the city, and then follow the same route as listed above.

If you’re flying into the Bay Area and then planning to take public transportation to get to Sonoma, you can take the Sonoma County Airport Express bus from San Francisco International Airport.

This shuttle stops in Rohnert Park, Santa Rosa, and Petaluma, so if you’re planning to stay in one of those cities, it’s doable.

The same bus also leaves from Oakland airport, so you can get from OAK to Sonoma as well the same way.

However, this isn’t the best way to get to Sonoma from SFO. Most people prefer to stay in other places in Sonoma, such as the city of Sonoma itself or Healdsburg.

If you are staying in Sonoma or Healdsburg, you’ll have to take a bus onwards from Petaluma or Santa Rosa (respectively).